DOUGLAS COUNTY, Ga. — The Douglas County school district is investigating a complaint that a 7-year-old girl played a racist character in a school play.

The parents of the girl, Anastasia Bertram, told

they are furious with

the teacher, Jamila James, who asked their daughter to portray a protestor against school desegregation.

It happened on March 2 at L.W. Burnett Elementary School in Douglasville.

In a video of the play, Bertram can be seen holding up a sign saying, "Please go home" on one side and "Cursed is the man who integrates" on the other side.

James told the parents Anastasia volunteered after another student struggled to learn the lines and follow directions. But the Bertrams said they had no idea until she was on stage.

They told Halloran they were not asked for parental consent.

"No, I’m gonna have a child stand on stage and tell black children to go away because they’re black. That is the option that we chose," said Anastasia's mother, Amber, "She’s 7, and you put her onstage and made her think what she was doing was OK? That’s not OK.”

Amber Bertram said she reached out to James on a platform called ClassDoJo telling her that she did not have parental consent to participate in the play and demanded an explanation as to why James thought this was acceptable.

“Ma’am, I understand your position, but we have several points to make: #1 Anastasia is 7 years old. She is taught to help adults as much as possible and to follow adult instructions unless it will physically 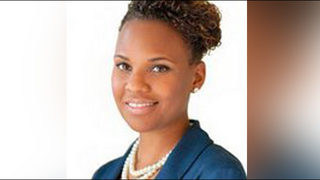 harm her. In our home there are consequences for breaking these rules. So, what she saw was the teacher needing help (according to you) and so she volunteered to help (according to you). Then when given the lines she was simply following adult instructions. At 7 years old there was absolutely no way possible she could have understood the compromising position she was putting herself in,” she said. “Also, because this play was photographed and videotaped by several parents and with today’s technology those images of my child can easily be altered to make it appear as if my child is not in a play but simply holding a sign telling black children to go away. This is NOT an image I want portrayed of my child. Nor did she have consent to be photographed and videotaped in this play. The point still stands that this play did nothing but perpetuate the idea of racism and teach my child that the school sanctions her discriminating against anyone who doesn’t look like her.”

She furthered that by writing,

“Under no circumstances is it ok in a play or not for you to have my child (one of the only white children in the school I might add) hold a sign telling black children to go away because they are black.” She further punctuated her discontent by writing, “My husband and I are extremely upset, shocked and embarrassed by this incident.”

The messages reveal Bertram made it clear she was going to file a formal complaint.

The Bertrams pulled both of their daughters out of the school following the two-second incident, and claim they didn’t receive a response from school officials until Halloran got involved.

According to the Bertrams, James responded by saying, “It was never my intention to isolate or make any racial group feel bad. I apologize for this, thanks for bringing this to my attention.”

Amber Betram said she wasn’t satisfied with her response so she sent her another message. The communication continued between parent and teacher with Bertram offering alternatives to honor Black History month. But Bertram said James deleted her profile and the communication ceased.

“She deleted my account, she just ignored the entire situation," she said.

The Bertrams said they continued to try to get answers and accused James of keeping the incident to herself.

Halloran made repeated calls and sent an email to the school on Wednesday but received no response. While she was interviewing the couple, Douglas County School District Superintendent Trent North left Amber a voice mail message.

"I am calling to apologize. I was unaware of the treatment of your daughter," North said.

The Bertrams' reaction to the superintendent’s message was met with swift criticism.

"Only because he was informed we were talking with you and that this was gonna go on the air and he didn’t want it on the air,” Amber Bertram said.

That was too little, too late for the Bertrams, who contacted Halloran for help. While North was apologetic, they feel he was trying to avert the story.

Halloran later spoke with North who confirmed he was launching an investigation and was insistent that he did not know about this incident.

However, North declined to speak on-camera but offered district spokesperson Portia Lake so Channel 2 Action News could get some answers.

Lake contended they’ve reached out to the family “numerous times” as recent as Tuesday but haven’t been able to get ahold of them.

Amber Bertram said that’s patently false. The district has not provided Halloran with proof of its efforts to contact the Bertrams for verification sake. But Lake said that is the case.

The incident is under investigation. A decision has not yet been made if James will be disciplined.

The video that infuriated the parents of a 7-year-old after her teacher had her portray a school segregationist during a school play without their knowledge or consent. “Go away, you don’t belong here.” Then she held up a sign that read: “Go Home.” Details @wsbtv pic.twitter.com/OwTXFy3mPu

Uber driver raped, assaulted while police searched for her for nearly 90 minutes

‘Arthur’ announces plans to end its 25-year run on PBS