11 people arrested, 9 on murder charges, in gang-related killings of siblings

11 people arrested, 9 on murder charges, in gang-related killings of siblings Police said nine of the 11 people charged in the case are facing murder charges.

CLAYTON COUNTY, Ga. — Eleven people have been arrested in the 2016 killings of two siblings who were asleep during a gang-related home invasion in 2016.

Police said nine of the 11 people charged in the case are facing murder charges. 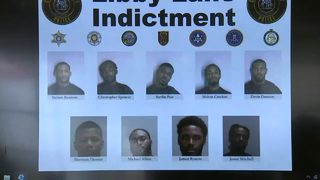 Police said after  almost one and a half  years of active investigation and more than 50  interviews of suspects and witnesses, the following have been identified as playing a key criminal role in the home invasion that resulted in the murder of Tatiyana Coates, 11, and her brother Daveon, 15:

NOTE: The 11th person was arrested on a weapons charge related to the case, but not directly tied to the murders, so he is not named above.

The indictment consists of the following charges, according to police:

Police said the group aimed to retaliate against a 15-year-old named DeAndre Mitchell, who stole guns from their gang.

“We believe it was case that they were there searching for DeAndre and thought he was in one of the beds,” said Clayton County police Chief Kevin Roberts.

Authorities stressed that the Coates children were innocently killed in their beds at the house on Libby Lane.

“They were visiting with another family," Roberts said. “There's no way they could know the harm coming their way.”

Channel 2's Steve Gehlbach was there at the scene the morning of October 2016 and remembers the then-chief and the current chief, who at that time was heading up criminal investigations, all visibly shaken by what they discovered.

Daveon and Tatiyana were shot and killed in a home invasion that police determined to be gang retaliation against someone who was not even there. They were asleep in their beds when they were killed, Clayton County police said.

There were also other small children in the house at the time and unharmed.

Then, this week, Channel 2 Action News cameras were there as a second suspect, Jamon Bynum, was arrested. He is also charged with the murders of the teens.

“His role is not yet completely defined, but we can confirm he was present when the homicides took place,” Clayton County police Chief Kevin Roberts said.

New documents obtained by Channel 2 investigative reporter Mark Winne also confirm that White, and others involved, are believed to be members of the "Crips," a violent street gang.

White’s attorney denies the teacher has any gang affiliation.

White has been removed from Toney Elementary School until an investigation is complete, district officials said. He has taught fifth grade at the school since August, and began with the district as a paraprofessional in March 2017.

“We were absolutely flabbergasted to come to the realization we had a fifth grade teacher in a public school teaching children to be part of this, so it took our breath away,” said Capt. Stefan Schindler.

‘Sounded like a scene from Jumanji:’ Monkeys escape from home in south Georgia