How old is Notre Dame cathedral? 4 things to know

PARIS — The Notre Dame Cathedral caught fire April 15. At more than 850 years old, it is one of the most notable monuments in Europe. Here are some facts about the historical importance of the cathedral.

Located on a natural island in the Seine river, the Bishop of Paris, Maurice de Sully, ordered its construction in 1160. The first part of the building was completed in 1177, when it was also consecrated.

Celebrated for its Gothic architecture, the building actually has multiple styles, including  French Gothic, Naturalism and Renaissance. It took about 100 years for the building's full edification. From 1163 to 1182, a choir and double ambulatory was constructed. From 1182 to 1190, the central part of the building, called the nave, began to be constructed.

Two towers on the facade and the high gallery, as well as the side chapels and enlargement of high windows -- a main feature of the cathedral -- were constructed from 1190 to 1225.

It has been speculated that the cathedral's Gothic architecture inspired Victor Hugo to write "The Hunchback of Notre Dame," which was published in 1831.

Boasting five bells, the South Tower bell is the most prominent in the cathedral. In 2015, the bells sounded the death knell after the terrorist attacks in Paris. 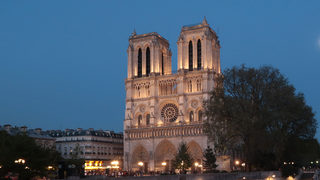 The great organ, the biggest in France, contains 8,000 pipes, five keyboards and 109 stops. First built in 1403, was replaced in the early 1700s with some smaller original parts remaining. In the 1990s, it was computerized using three networks. It was restored between 2012 and 2014 with some modifications and replacements.

Between 1845 and 1870, there was an attempt to restore the cathedral. New additions were built and damage from the century before, including from the conversion of the cathedral into a food storage warehouse in the French Revolution. In that period of social and political upheaval, the structure underwent significant damage. It has been reconstructed several times since then.

According to the Paris fire brigade, the fire that emerged in 2019 may have a relation to the renovations that were underway on the cathedral. The $6.8 million renovation project was in the works on the church's spire and 250 tons of lead.

The historical significance of the Notre Dame Cathedral  dates back hundreds of years.

The iconic structure was completed in 1260, a hundred years after building first started, although some argue that technically it was finished until 1345 when the flying buttresses were added, according to Notre Dame Cathedral History.

The Eiffel tower, another of Europe's greatest landmarks, is only 130 years old by comparison.

For a better understanding of just how historic the cathedral really is, it was under construction in 1215 when the Magna Carta was signed and during the lifetimes of people like Marco Polo and Thomas Aquinas, and when Kublai Khan was leading the Mongols.

A few other interesting historical facts about Notre Dame, it was more than a 160 years old when Joan of Arc would have worshiped at the church in the 1420s and was 232 years old when Columbus arrived in the Americas.

The cathedral had already existed for 500 years by the time Michelangelo painted the Sistine Chapel in 1511 and Da Vinci painted the Mona Lisa in 1506.

It was already 341 years old by the time William Shakespeare wrote "Hamlet."

Information from the Atlanta Journal-Constitution was used in this report.