NEW ORLEANS — Christina Aguilera was in New Orleans Thursday ahead of her Friday show as part of her Liberation Tour and stopped by a popular bar, but when she wanted to hop on stage with the band, she was turned down.

WGNO reported that Twitter user @drMediaPro posted a video on Twitter of the vocalist speaking with musician Claude Bryant of Claude Bryant and the All Stars about coming on stage and singing with the band. The Twitter user, posted the video taken by his wife, who was at Cafe Negril.

After speaking a bit more with the band member, Aguilera turns her attention to fans who want to take selfies with her. She appeared to take it all in stride.

My wife is in New Orleans and last night at the bar she was at, comes in @xtina!!! She asked the house band if she can sing a tune and... Nope! As if she was denied?! That would have been so cool to see her sing. More to the story Christina? pic.twitter.com/NoWTwkYfyL

At her show at Saenger Theatre Friday night, Aguilera spoke some about her time at the bar. Marchaund Jones of The Advocate posted video of Aguilera telling the story on Twitter.

"I go to this little bar and there's this live band playing, and I was just like, you know, with a couple of my dancers and the whole thing and, you know, after a minute, I was just like, 'Let me just get up on stage and jam with this guy. Maybe I'll sing a song or whatever and be fun,'" she said. "He would not give me the mic. He was, like, a little older and he was just like, he was not feeling it. He was not gonna give up his mic. I was like, 'Oh, I just want to come just let me come up,' and he (was like), 'What, are you gonna dance for me?' I was like, 'No, I just want to sing a song with you.'

"So I was like, 'OK I'll just save it for tomorrow, then.' It's alright. It's all good. He was like, 'Don't hurt yourself!' I was like, OK. This is just -- you're not feeling me. It's OK. I'm just gonna depart ways. Be on my little merry way. Find somewhere else to go."

“I’m sorry, Christina. I just didn't recognize you! I didn't recognize her because she had a cap over here head and over her eyes. She was in a jersey. She didn't introduce herself to me, but she had very soft hands and that got my attention.” Bryant said. “I asked her if she wanted to dance and she said that she wanted to sing. I started playing the beginning riff of the song, ‘No, No, No’ by Bob Marley, but then her bodyguard picked her up off the stage and she left.” 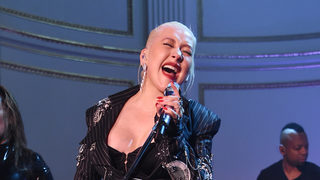 Bryant said he’d love to have Aguilera sing with the band in the future, and that he feels bad about the misunderstanding.

"Come back Christina," he said. "You can sing anything you want with us."

Aguilera is currently wrapping up her Liberation Tour. According to her website, the last scheduled date is Tuesday in St. Petersburg, Florida.