Houston still dealing with feet of water from flooding Thousands of people have been rescued from their homes.

HOUSTON — As floodwaters from Harvey's downpours keep rising, some Houston-area residents must decide between staying in their homes with water pouring in or venturing out into potentially deadly flooded roads.

People waded in chest-high floodwaters in the U.S.'s fourth-largest city, as Houston's mayor announced Sunday that the main convention center would be opening as a shelter, evoking memories of Hurricane Katrina, when breached levees in New Orleans stranded tens of thousands of people in squalid conditions at the football stadium and convention center.

Rescue workers were so overwhelmed with calls for help Sunday that initially they were able to respond only to life-and-death situations.

PHOTO: Heroes of Harvey: Images of inspiration during devastating flooding

Houston authorities urged people to escape to the roofs of their homes to avoid becoming trapped in attics, which caused more than a dozen deaths in Katrina's aftermath. Residents were asked to wave sheets or towels to draw attention to their location as floodwaters reached second-story levels -- echoing images from New Orleans.

All of the main interstates through Houston are currently flooded, stranding drivers who tried to challenge a couple of feet of water.

As they were making their way to their hotel, they spotted Houston police aiding a woman in labor. With 911 swamped with calls, there was more than a two-hour wait for an ambulance.

By daylight, Monahan said Interstate 10 was a ghost town. By the afternoon, the same roadway was underneath a couple feet of water.

"The problem, as you can see, it's just not stopping. The bayous start cresting and it has nowhere to go so it starts backing up into the neighborhoods," Houston resident Sam Ray told Monahan.

Those waves of rain are projected to send water levels even higher.

"The worst is yet to come, is what I hear," another woman said.

👇 This is unbelievable. We had to alert this on our @wsbtv app after @KarenMintonWSB tweeted the information below. https://t.co/nLyZyEXVcK pic.twitter.com/wU1g22nbHm

"It's incredible to see cop after cop, flood after flood, in my very own neighborhood. It's crazy. I can't even go anywhere, I feel trapped," said resident India Goldsmith.

From the bridge over Memorial Drive, you can see Buffalo Bayou swollen hundreds of feet over its banks.

"I've never seen, looking downtown, the bayou go all the way, you don't even see Memorial Drive. You don't even see the parkway, all those things are just under water," resident Cindi Ray said.

Volunteers from metro Atlanta answer the call to help

The Red Cross in Atlanta is sending volunteers and supplies to Texas and Louisiana, to help with the sheltering and feeding of thousands.

"It’s amazing. We’ve got enough supplies in Texas to open shelters for nearly 30,000 people at this point, and are actually planning for more," said Sherry Nicholson, a spokesperson with the Red Cross.

Sunday, 13 tractor trailers filled with cots, blankets and other supplies left Union City for the hard-hit areas. The Red Cross says its ramping up its efforts.

“We are really gearing up to send lots more people, especially for the need for sheltering. That’s going to be, we know, a huge need for weeks, maybe months,” Nicholson said.

Late Sunday night, American Medical Response began to deploy more than 55 paramedics and ambulances to the Dallas area in cooperation with FEMA.

"(I'm) Incredibly proud of this staff going down to Texas to assist in this effort," said Terence Ramotar, the Regional Director for AMR.

"Every disaster is different. We have certainly in our history done some really big ones, and this is going to fall in the really big category. We will find a way, and we’ll be there until the need is gone," Nicholson said.

The White House said Trump stressed his expectation that "all departments and agencies stay fully committed to supporting the governors of Texas and Louisiana" and that his "number one priority of saving lives."

In a conference call Sunday with reporters, Oditt says Coast Guard personnel and aircraft from around the country have been dispatched to Texas. He says Texas Air National Guard choppers were also assisting with rescues.

[READ: Harvey evacuee in shelter: ‘Everyone’s been so helpful here.’]

Oditt says people facing rising floodwaters should not go into attics, since rescuers in the air cannot see them. The incident commander urged people who head to their rooftops to wave sheets, towels or anything else to attract the attention of helicopter crews.

Coast Guard helicopter crews along the southern portion of the Texas coast are reporting the rescue of almost 40 people, starting from the morning before Hurricane Harvey made landfall. That includes six people rescued from their home Saturday evening in the hard-hit city of Aransas Pass. Among them were three children, their two parents and an elderly woman who was in need of oxygen.

Elderly couple makes their way across flooded street in Houston as neighbors hurry to retrieve their possessions https://t.co/JZvofyopoP pic.twitter.com/qF1FQv3jcm

Houston Fire Chief Samuel Pena says that since midnight his agency has responded to more than 2,500 emergency calls and another 1,000 calls are waiting to be serviced.

Pena says his agency has made more than 250 water rescues, all of them people in vehicles, during a three hour period overnight. 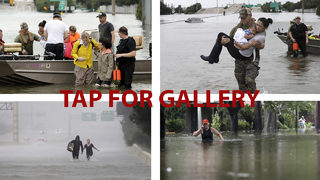 But Houston Assistant Police Chief Larry Satterwhite says there has been an increase in calls from residents with flooded homes in the city's northeast, southeast and southwest sections.

Several hundred people have arrived at the downtown convention center the city of Houston has converted into a shelter after floodwaters from Tropical Storm Harvey inundated much of the city.

Ken Sandy has been designated shelter manager by the Red Cross. He said Sunday that his volunteers are prepared for 1,000 people at the George R. Brown Convention Center, and the center is big enough for them to expand if necessary. The center has 1.8 million square feet (0.17 million sq. meters) of space.

Volunteers are handing out towels to people entering the cavernous center. Cots have not yet arrived.

Authorities across Houston and surrounding Harris County are quickly opening shelters as the full toll of the flooding becomes clear and thousands of people evacuate their homes.

(The Associated Press contributed to this article)

Hurricane Ian: Child falls to death from balcony while evacuating