ATLANTA — It's been a busy day in Georgia as severe weather moved through, causing a ground stop at Atlanta's airport and damage in parts of the state.

A ground stop was briefly issued for Hartsfield-Jackson Atlanta International Airport but it has since been lifted.

Emergency officials in Paulding County surveyed areas but did not find any damage.

Storms and rain are moving into the metro Atlanta area

[DOWNLOAD: WSB-TV's news app to watch our newscast if the power goes out in your home]

Damage reported in parts of Georgia:

Carroll County Fire Deputy chief Tad Richardson confirms the back wall of Fire station 22 on Brumbelow Road was damaged by high winds. He said there were no injures and no damage to equipment.

Channel 2's Berndt Peterson reported on a large tree down in Carrollton on Channel 2 Action News at 6 p.m.

Heavy damage near downtown Carrollton. Lots of trees down. pic.twitter.com/yyDwaubF75

Channel 2's Tom Regan was in Carrollton on the campus of the University of West Georgia where some damage was reported.

Channel 2's Liz Artz was in Spalding County where there was also a decent amount of damage.

Kaneisha Williams describes to Artz the moment a big tree came crashing down on her Spalding County home Monday.

The mother of four told Artz the power went out instantly and crews have already warned it could be days before repairs are made and power is restored.

She's not sure how she'll take care of her family.

“You got to figure out how feed them,” Williams said.

Several blocks away a food store suffered serious roof damage when strong winds ripped through, peeling back the metal roof and causing water to leak into the grocery.

However, it wasn't just business owners and residents.

The Griffin Police Department was in the dark for more than 2 hours after the back-up generator failed during Monday's storms. The outage shutdown daily work at the department for hours.

Headed back to @wsbtv from Spalding Co. w/ @Photogfred on the run all day chasing ⛈ damage Thankful -- no injuries #ReporterLife #BusyLife pic.twitter.com/TdTgzQVVdU

Laura Richards spoke to Channel 2's Tom Jones who is cleaning up the damage after heavy rains and wicked winds knocked down trees in her yard in South Fulton County.

She looked out and saw the storm knocked down a large tree, blocking her driveway.

“Another one snapped off in my backyard and hit my shed and I saw that happen,” Richards said.

She told Jones it left her afraid and seeking cover.

There was a tornado warning in the area when Richards' trees came down.

Chattahoochie Hills Fire Chief Greg Brett isn't sure it was a tornado that hit the area.

“I'm guessing not a tornado based on the fact it’s a lot of tops of trees,” Brett said. “If it were a tornado it was moving higher and perhaps never touched down.” 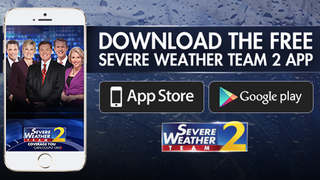 Once that system moves out, it will be clear for the Tuesday morning commute but there is another threat for severe storms moving in on Wednesday.

Behind all that wet weather though is cooler and drier air, making for what is expected to be a pleasant weekend by Saturday and Sunday.