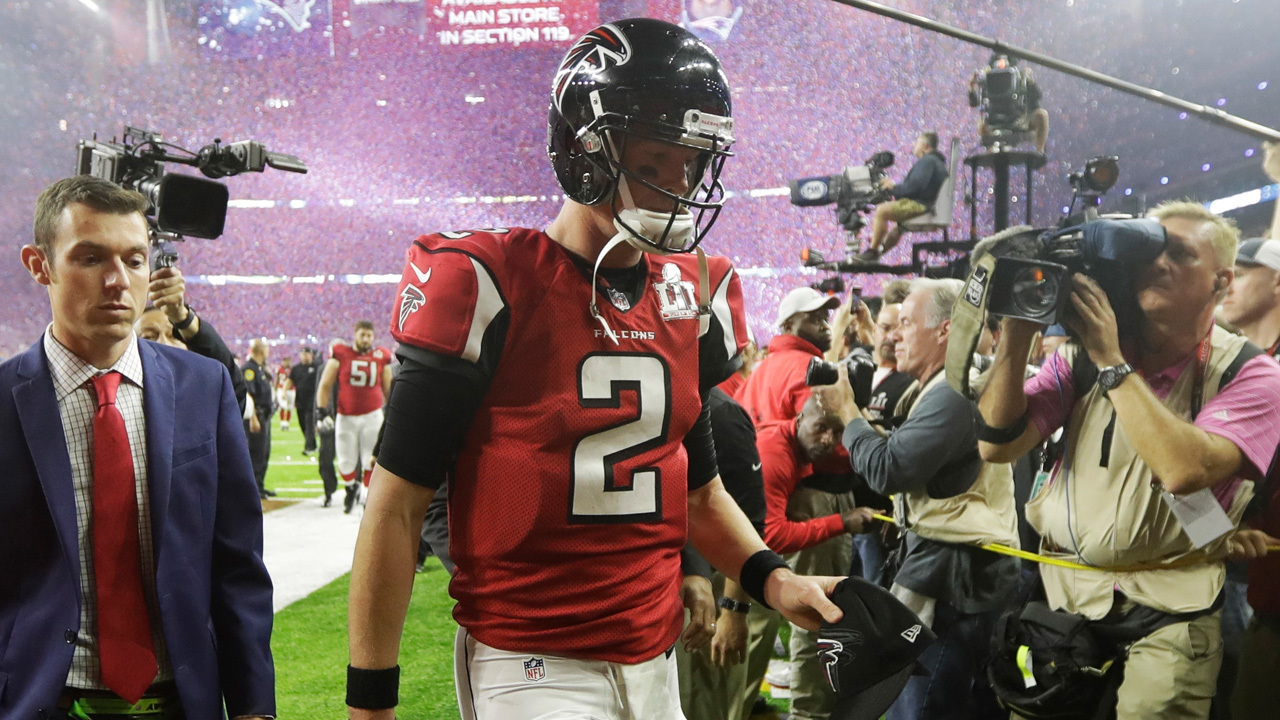 The 2017 sports moment we all wish we could forget. After defeating the Green Bay Packers 44-21 in the NFC Championship Game, the Atlanta Falcons fell to the New England Patriots, 28-3, in the 2017 Super Bowl. The Falcons led 28-3 at halftime, but the Patriots scored 19 points in the final quarter, including a pair of two-point conversions, then marched relentlessly to James White's 2-yard touchdown run in overtime to win the game. It was the biggest collapse in Super Bowl history, the first NFL championship game to go into overtime and the biggest comeback in Super Bowl history.

In his ninth NFL season, Falcons’ Matt Ryan received the 43rd MVP honored by the PFWA, becoming the first Atlanta Falcons player to earn the honor and the fourth consecutive quarterback. “Matty Ice” set franchise records this year in passing yards, touchdowns, completion percentage and passer rating. His 117.1 rating was fifth-highest in a season. Ryan led the NFL with 9.3 yards per attempt, the highest mark since Kurt Warner in 2000. He also led the NFL with 13.3 yards per completion and set at NFL record by throwing touchdowns to 13 different receivers last season. 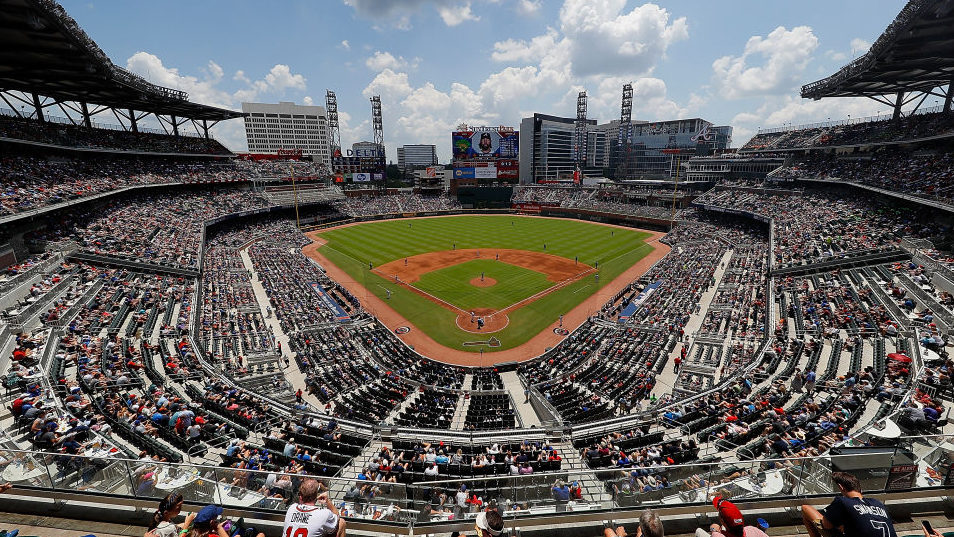 The Braves' former stadium –Turner Field – was transformed to a football stadium for Georgia State University. The former Turner Field is the site of where a World Series was played; an All-Star game, Greg Maddux, Tom Glavine and John Smoltz pitched there on their way to Cooperstown; and Randy Johnson pulled off that rarest of baseball feats: the perfect game. 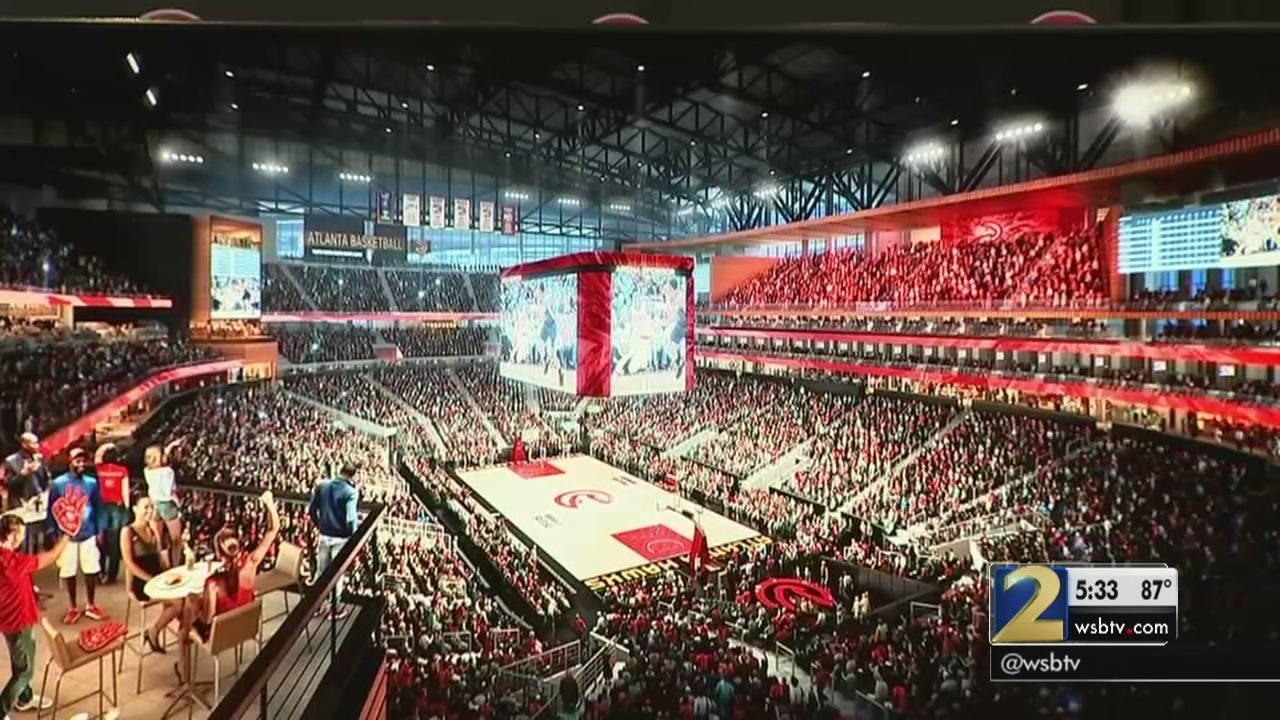 The Atlanta Hawks clinched a spot in the 2017 NBA Playoffs, marking the 10th straight season they have made a playoff appearance and the longest active streak in the Eastern Conference. The Hawks' streak is the second-longest in the NBA behind San Antonio's 20 seasons.

The Hawks playoff berth also marked the third-longest active postseason streak in the four major professional sports, behind San Antonio’s 20 and the Pittsburgh Penguins’ 11-year run. Phillips Arena, home to the Atlanta Hawks, also began the process to get new renovations that included a courtside bar, barbershop and golf simulators to name a few. 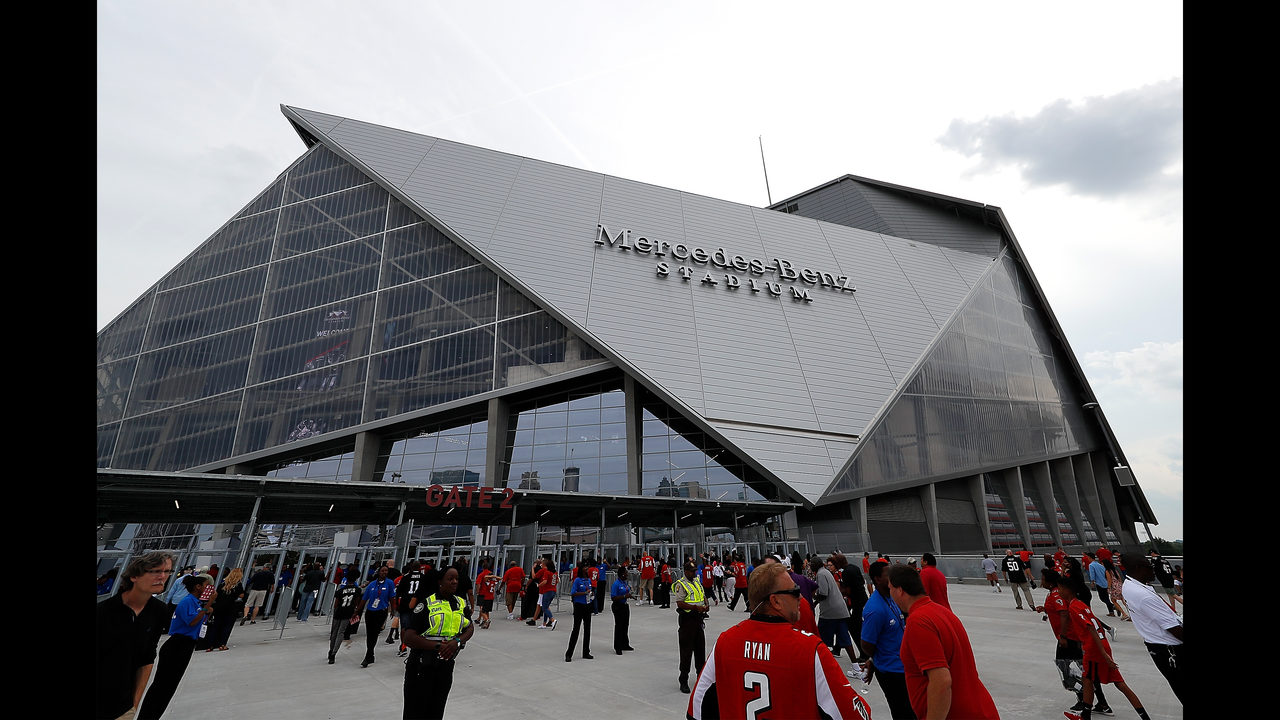 The Falcons played their first-ever game inside the new Mercedes-Benz Stadium, losing to the Arizona Cardinals, 24-14. Beyond the actual game, fans witnessed all of what the $1.5 billion state-of-the-art facility had to offer. Atlanta played its first regular-season game against Green Bay, beating the Packers 34-23 in a rematch of the 2017 NFC Championship Game. 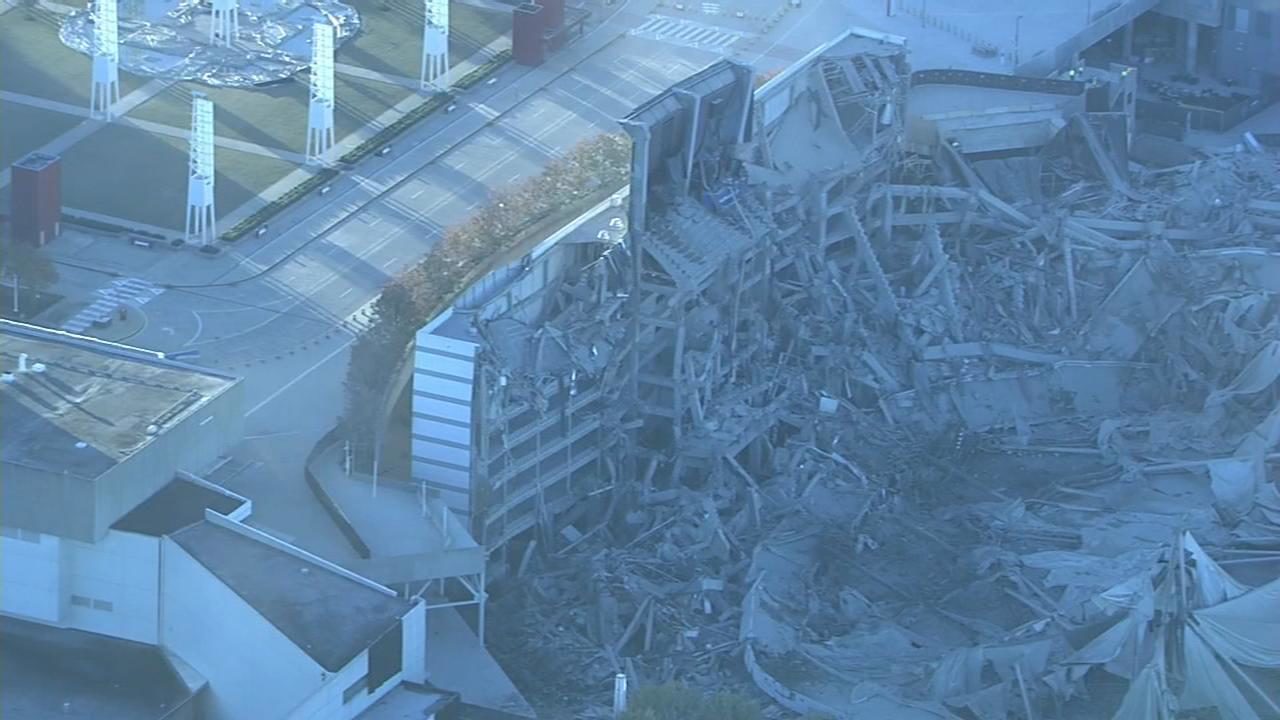 Atlantans said goodbye to the Georgia Dome after 25 years of epic moments and memories. It took only 12 seconds for the stadium to be demolished, but it will take months to clean up the rubble. It took nearly 5,000 pounds of dynamite to bring down the sports arena. A section of wall that remained after the first demolition was taken down in a second demolition.

Once the cleanup from the Georgia Dome is complete, construction crews will begin a major overhaul of the space, which will add 100,000 more square feet to the Georgia World Congress Center convention area. The area in which the Georgia Dome sat will become the Home Depot Backyard, a green space. 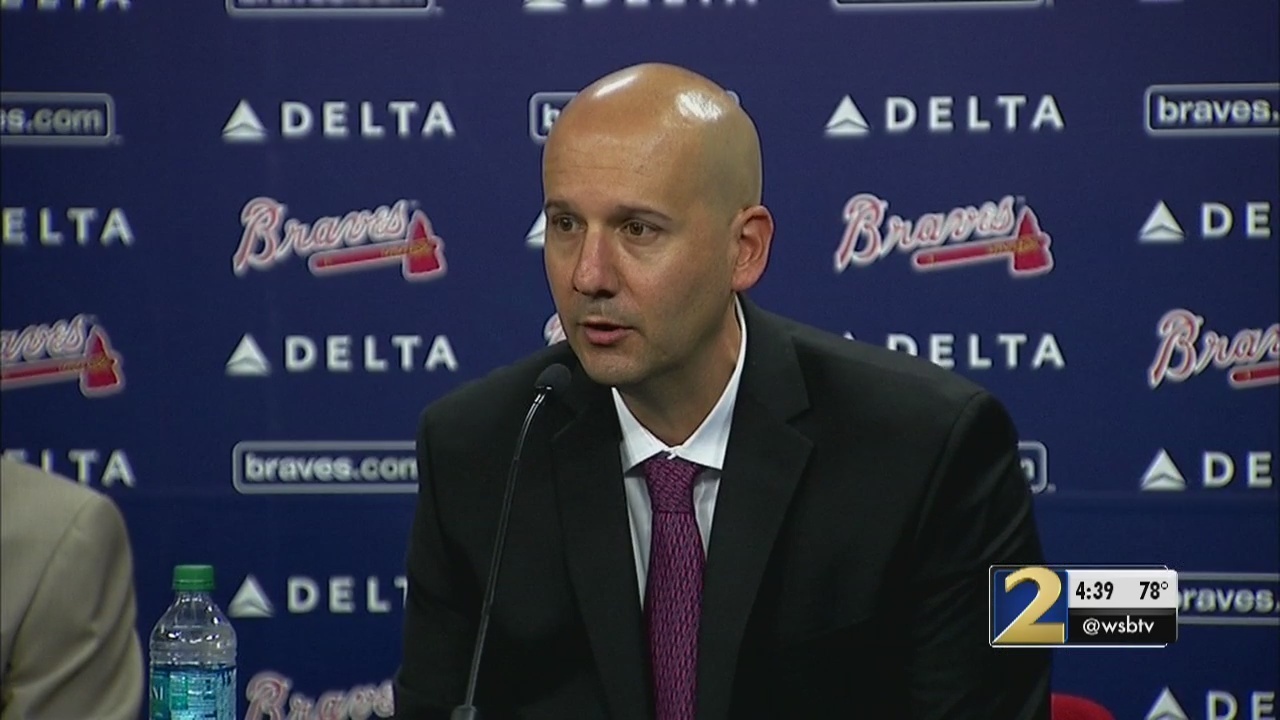 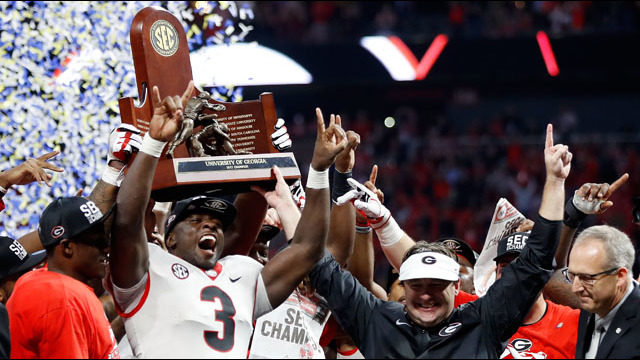 After losing to Auburn in the regular season, the Georgia Bulldogs got their sweet revenge in the 2017 SEC Championship game, beating the Tigers 28-7. With the win, the Tigers secured a conference championship and trip to the Rose Bowl in a matchup against the Oklahoma Sooners.

Georgia State's fledgling football celebrated a 27-17 victory over Western Kentucky, the first postseason win in school history. Conner Manning threw for 276 yards and a touchdown for the Panthers (7-5), who had a winning record for the second time in the program's eight-year history and set a school record for victories in a season. The Panthers’ appearance in the Cure Bowl was the team's second in three years. The Panthers lost to San Jose State 27-16 in 2015, finishing 6-7.

Tyra Banks named new host of ‘Dancing With the Stars’