REDLAND, Ala. — A U.S. Air Force veteran who shot his wife and 12-year-old triplet daughters before killing himself Saturday afternoon at the family’s Alabama home did so just nine days after his wife filed for divorce, according to news reports.

Robert James "Bob" Orsi, 50, also set fire to the family's home in the Redland community near Wetumpka, The Wetumpka Herald reported. One of the triplets perished inside the home, while the other two girls were able to get out despite suffering multiple gunshot wounds.

Both of those daughters are in stable condition and are expected to survive, the Herald reported. One girl may require further surgery.

Their mother, Charlene Ann "Charley" Orsi, 44, was also killed in the shooting. Elmore County Sheriff Bill Franklin told the Montgomery Advertiser that Charley Orsi had apparently just arrived at the house to pick up the children.

One of the children had texted her to say that their father had calmed down and she could come to pick them up, the sheriff told the Advertiser. It was not clear why he was upset that day, but his wife was seeking custody of the couple’s four children in the divorce.

Franklin said in a news release that the investigation indicated Bob Orsi may have been abusing drugs, which was part of the reason for the marriage's breakup.

Charley Orsi, also an Air Force veteran, was a third-grade teacher at Redland Elementary School. According to her biography on the school's website, she and her husband were married in 1994.

The triplets have a 13-year-old sister, Adrianna, who was able to escape the shooting unharmed.

Franklin told the Advertiser that the older daughter escaped after witnessing her mother's killing near the garage of the house.

“The 13-year-old saw her mother get shot and fled to a neighbor’s home,” Franklin told the newspaper. “Mr. Orsi then placed the triplets in the house, on the floor, and shot them multiple times.”

He then went through the house with a container of gasoline and poured the fuel throughout before setting it ablaze, the sheriff said. Katherine and Patricia Orsi were able to stumble from the house as their father doused the home.

Orsi’s body, as well as that of Cadence, was found once firefighters extinguished the fire.

UPDATE: Charlene Ann Orsi was found dead in the carport, and the child killed was found in a bedroom. The two injured children escaped after being shot, and a fourth child was able to flee unharmed to a neighbor’s house. pic.twitter.com/xpqxwIhC5r

There are very specific things YOU can do to help the Orsi children in the wake of this weekend's tragedy. >> https://t.co/T9s8c3XWzu pic.twitter.com/JgWWpA9bNZ

"We found Mr. Orsi's body in the rear of the home," Franklin told the Advertiser. "There was a large-caliber handgun beside his body. We feel he died of a self-inflicted gunshot wound, but we have to wait for forensics to tell us exact cause of death for all three victims."

Franklin told WSFA 12 News in Montgomery that neighbors reported hearing multiple explosions during the fire. The sheriff said it was possible that Orsi, who was a "military guy," had ammunition or other explosives in the house. According to Charley Orsi's biography, he retired in 2014 after 29 years of service. 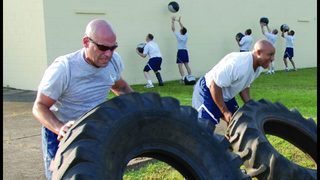 Senior Master Sgt. Robert "Bob" Orsi, left, is pictured in 2009 during fitness activities at Maxwell Air Force Base in Montgomery, Alabama. Orsi, who subsequently retired from the U.S. Air Force, is accused of shooting his wife and triplet 12-year-old daughters Saturday, July 7, 2018, at the family's home near Wetumpka before setting the house on fire and turning his gun on himself. Two of the girls survived, but one triplet, Cadence Orsi, died, as did Orsi's wife, Charlene "Charley" Orsi, 44. A 13-year-old daughter escaped the shooting unharmed. (U.S. Air Force photo/Jamie Pitcher)

A 2009 feature by the Air University Public Affairs Office at Maxwell Air Force Base in Montgomery indicated that Bob Orsi, then a senior master sergeant, served at the time as an instructor at the Senior Non-commissioned Officer Academy.

A deputy who responded to a 911 call around 5 p.m. Saturday found the house engulfed in flames, Franklin said in a news release. When he found Charley Orsi's body, he thought there might still be an active shooter situation inside.

"He ran inside the burning home, but could not locate anyone," Franklin told the Advertiser. "He had to run back outside because of the fire."

Charley Orsi’s parents and brother, who had recently decided to move to Alabama from New York, arrived at the home as deputies and firefighters worked the crime scene, Franklin said.

"They had bought property in a nearby community and were moving down here to be closer to the children," Franklin said. "They show up when all this is going on. So, you can imagine what they are going through."

Charley Orsi's mother, Veronica Aurelio, over the past year posted a series of photos on Facebook honoring family members who had served in the military. The images included pictures of both her daughter and her son-in-law in uniform when they were younger.

Charley Orsi's sister, Sarah Jane Ralston, wrote on Facebook about the immense outpouring of love and support the family has gotten from friends of her sister and nieces.

"Despite the struggle my surviving nieces must now face, I know Charley and Cadence are watching over them with pride at how courageously they are handling their horrific situation," Ralston wrote. "My sister certainly raised her girls to be motivated and strong. While they will never stand alone, they will always be able to stand on their own two feet, heads held high, accomplishing their dreams."

Charley Orsi's own Facebook page was full of photos of her daughters, including images from the time they were infants to the present day.

Two photos she posted a week before the shooting included one of her daughters seated on a rock in Central Park.

When a friend asked if they’d had a good time, Orsi wrote back that they did.

Those final photos were posted two days after Charley Orsi filed for divorce, according to the Herald. Court records show that, along with sole custody of the children, she also requested child support, alimony and an equal division of the couple's assets.

Five days before the slayings, Robert Orsi's lawyer filed a response in which his client denied his wife's contention that the couple had "such a complete incompatibility of temperament" that they could "no longer live together as husband and wife," the Herald reported. He also denied that the marriage was broken beyond repair.

Many in the Redland community, which is about five miles southeast of Wetumpka, are pulling together to support the surviving Orsi sisters, who have lost both their mother and their father. Redland Elementary planned to have counselors on campus, despite summer vacation, Monday and Tuesday for anyone in the community trying to process the tragedy.

✳️ Update: See you Saturday morning 8 AM - Noon to pick up your bracelets at Redland Elementary and raise money for the...

We are all heartbroken at the loss of our wonderful teacher and her daughter. Please pray for her girls and family. If you would like to help, feel free to contribute here.

Redland Hills Church also planned to open its doors Monday evening for classmates of the Orsi girls and students of Charley Orsi to gather.

The school's Parent-Teacher Organization is also accepting donations, gift cards and clothing for the surviving children. Bracelets emblazoned with #redlandstrong are also being sold to raise money for the girls.

A GoFundMe page set up for the siblings raised more than double its $10,000 goal in just one day.

‘We have to do better:’ Atlanta rapper speaks out on social media about gun problem in the city

Hundreds of New Yorkers may be infected with polio virus, health officials say