Millions of Georgians have already cast their ballots and state officials are confident that millions more will have a good experience at polling places on Election Day.

What you need to know:

Channel 2 Action News will be at the polls as they open at 7 a.m. on Tuesday and provide in-depth coverage on television and on digital platforms that is unmatched in Georgia.

Only Channel 2 investigative reporter Aaron Diamant traveled with Secretary of State Brian Kemp across Georgia on Monday as he toured polling sites in five regions.

[ Diamant reported in late October that the state was looking into claims that machines had flipped votes. ]

State officials told Channel 2 Action News they were looking into flipping claims in 5 counties including Cobb, Clayton and Coweta.  All of those claims turned out to be unsubstantiated.

Channel 2 Action News set up a voter hotline to report any problems at the poll. If you have any trouble when voting or see irregularities text our voting help line at 470-485-2WSB or 470-485-2972. You can also send a photo of your voting experience. 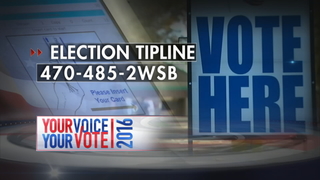 Polls close at 7 p.m. on Tuesday but it could be hours before voters know who Georgia elected to be president.

A team of more than 60 journalists is working on Election Day and night, driving Georgia's most complete coverage.

Channel 2 will have live coverage on our website and apps starting at 8 p.m. on election night with a special election night edition of the Channel 2 Action News Nightbeat at 11.

ABC News will carry coverage of national races on Channel 2 starting at 7 p.m. and continuing throughout the night.

Viewers can expect live real-time election results covering more than 700 local, state and national races on wsbtv.com and in our Channel 2 Action News app. Download it for your smartphone and get breaking news election alerts immediately.

Local teacher being recognized on national level on ‘Live! With Kelly and Ryan’