Investigators say the suspect was on probation when he broke into several homes.
By: Tom Jones
Updated: April 26, 2018 - 11:20 PM

SOUTH FULTON COUNTY, Ga. — A woman said she can't believe a burglar broke into her house while he was wearing an ankle monitor.

Police told Channel 2's Tom Jones that they quickly busted the serial burglar because they knew every house he'd hit.

Investigators said Tristahn Ash was on probation when he broke into several homes.

“I don't think they are very bright,’ the homeowner told Jones, asking not to be identified.

She told Jones she got a call Friday from her security company and she and her coworker looked at the security app on her phone.

“We see two people walking around inside my house, you know, undoing one of my televisions,” the homeowner said.

She said the crooks ransacked her Clayton County home, grabbing electronics and even her daughter's piggy bank.

“They took several TVs, a mac laptop, a Dell laptop, and they took all of my daughter's gaming systems,” the victim said.

When she arrived home, she said police from Clayton County, the City of South Fulton and Fulton 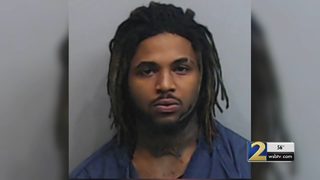 When officers heard the burglars left in a gray Charger, police were confident they would catch at least one of the burglars.

That's because police said Ash was wearing an ankle monitor during the break-ins.

“So, they can pinpoint every place where this gentleman went,” the homeowner told Jones.

Officers said the monitor placed Ash at five homes that had been broken into around the same time.

They said they even tracked him to his home the day of the burglary where they arrested him.

The homeowner wonders what was the ankle monitor-wearing burglar thinking.

“Why would you do something like that, when somebody can see where you are?” she said.

Police say the gray Charger belongs to Ash's girlfriend, which also pointed officers to him,

Ash is being held without bond on five counts of first-degree burglary.

By  Aaron Martin and WPXI.com

Coronavirus: SC teen supposed to be under self-quarantine accused of coughing on officers