Hurricane Irma expected to make landfall as Category 3 A Tropical Storm Watch is in effect for parts of metro Atlanta.

ATLANTA — A Tropical Storm Warning is in effect for parts of metro Atlanta as Irma takes aim at Florida.

The storm battered Cuba Saturday morning as a Cat. 4 storm.

Severe Weather Team 2 is tracking the latest projected path of the storm on Channel 2 Action News Sunday AM.

[A message to you about Hurricane Irma]

The storm is expected to make landfall as a Category 4 on Sunday. 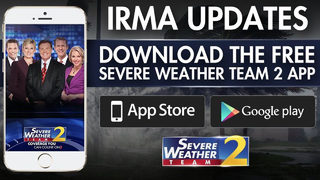 Once the storm makes landfall, it will weaken as it makes its way up Florida. Severe Weather Team 2 Meteorologist Katie Walls said as long as the storm doesn’t make its way over the Gulf of Mexico, Irma will weaken significantly by the time it reaches the Georgia-Florida line as a tropical storm.

That storm will then work its way to metro Atlanta. The timing right now shows the storm reaching the metro Monday morning into Tuesday morning.

Walls said areas could have sustained winds of 40 mph and gusts of up to 60 mph.

As we head into Tuesday afternoon, the storm will continue to weaken to a tropical depression as it moves out of Georgia altogether.

Along with heavy winds from the storm, the metro area will see 3 to 7 inches of rain.

A Flash Flood Watch is in effect Monday morning through Tuesday morning.

“That is not going to cause the flooding seen with Harvey, but it could cause flooding or flash flooding in low-lying areas -- areas of poor drainage. That’s one concern. The other concern, of course, is the wind,” said Severe Weather Team 2 Meteorologist Brad Nitz.

[READ: Mandatory evacuation issued for parts of Georgia ahead of Hurricane Irma]

She said there could be downed trees and power outages due to the wind.

Walls said parts of the metro will also see higher risk for small tornadoes Monday into Tuesday as the storm makes its way through the metro.

Saturday morning drivers saw a contraflow of traffic on Interstate 16 to help with now-mandatory evacuations.

Gov. Nathan Deal is urging Georgians to have a healthy fear of Hurricane Irma.

“Just because the weather appears to be calm now, don't take that for granted," Deal said during a Friday news conference.

Floridian Taylor Buck wasn't taking anything for granted and thought he was taking the proper steps to keep his family safe but told Channel 2’s Carl Willis that changed Thursday night when he said the Holiday Inn Northlake canceled his reservation.

"It's not a good feeling because all week we felt like we had a plan. We were ready to go. And that just blew up," Buck said.

He told Willis that a hotel manager told him his five rooms were sold out from under him to a national bank that needed 75 rooms for its employees.

A manager denied that when Willis asked questions, but then she put Willis on hold and never returned to the phone to explain.

Buck couldn't find another room and said his family was left to face the risk in Florida.

"I hope that we're going to be safe. I hope there aren't any other families affected by this," Buck said.

Workers in FEMA's regional coordination center in DeKalb County are working to minimize the impact.

They told Channel 2 Action News at last count there were 7,500 federal personnel deployed, with more on the way.

They said there were 10 urban search and rescue teams strategically positioned in Florida and Georgia.

FEMA said they had nearly 10 million liters of water, more than 5 million meals, 13,000 cots and 41,000 blankets ready to be deployed where needed.

"It's organized chaos. We've been doing this for a few days, and we've done it before," Brandon Bolinski with FEMA said.

Search warrant leads to over 600 grams of meth, dozens of guns seized in north Georgia home