With landfall just hours away, the coast of North Carolina is already feeling the power of Hurricane Florence. The storm has been downgraded to a Category 1 hurricane.

Streets began to flood earlier in the day Thursday as high tide came in and hurricane-force winds were already being felt onshore.

The last update from the National Hurricane Center said Florence had sustained winds of 100 mph, with gusts up to 120 mph, and the storm's center was about 50 miles off the coast of Morehead City, North Carolina.

"The storm is moving very slowly, but even though we don't have a major hurricane, the wind field is absolutely huge," Burns said.

On top of the wind, the rain is expected to devastate the area.

Wind whistling now as intensity picks up in Wilmington... live in 5 minutes on @wsbtv #stormwatchon2 pic.twitter.com/V7xuLdUWt5

The storm is expected to move very slowly, dumping more rain across the state before moving north over the weekend.

Severe Weather Team 2 Meteorologist Brian Monahan is in Wilmington, North Carolina where he saw conditions go downhill fast throughout the day and evening.

He said the wind had already gotten strong enough that he was having a hard time keeping the hood of his raincoat on his head.

Severe Weather Team 2 is tracking Hurricane Florence as it approaches the East Coast, for updates on Channel 2 Action News This Morning, starting at 4:30 a.m.

All 159 Georgia counties are under a state of emergency as Hurricane Florence approaches.

“In light of the storm’s forecasted southward track after making landfall, I encourage Georgians to be prepared for the inland effects of the storm as well as the ensuing storm surge in coastal areas," Deal said.

[RELATED: Concern for coastal Georgia residents increasing ahead of Florence]

Severe Weather Team 2 says in metro Atlanta, Florence will bring some rain, but wind should not be an issue.

By the time it reaches Georgia late Sunday into Monday, it will likely be a tropical depression.

"With the track that's projected here, we've got 30-mph winds in northeast Georgia," Nitz said. "Even that won't cause any problems, and it would be just a light breeze locally in the metro area."

Good news, if you're headed to Music Midtown this weekend, you can breathe a sigh of relief. Most of the festival should be hot and dry, but rain clouds could loom when Imagine Dragons and Kendrick Lamar take the stage in the 8 p.m. hour Sunday.

On Thursday, UGA announced that it is moving up the time for Saturday's game against Middle Tennessee State University to 12 p.m. to accommodate travel for those in areas that will be affected by the storm.

A Storm Surge Warning is in effect for:
South Santee River South Carolina to Duck North Carolina
Albemarle and Pamlico Sounds, including the Neuse and Pamlico
Rivers

A Hurricane Warning is in effect for:
South Santee River South Carolina to Duck North Carolina
Albemarle and Pamlico Sounds

Interests elsewhere in the southeastern and mid-Atlantic states should monitor the progress of Florence. 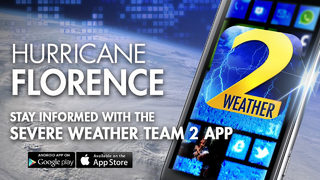