On Tuesday, voters outside Atlanta will head to the polls to fill the seat in the U.S. House of Representatives left vacant when President Donald Trump tapped Republican Tom Price to serve as his Secretary of Health and Human Services.

The much-anticipated special election will go down in history as one of the most expensive congressional races ever. The Democratic candidate, Jon Ossoff, a 30-year-old documentary-film producer and former congressional aide, has drawn national attention and managed to raise an incredible $23.6 million, largely from donors outside of the district and state. Historically, the next closest House race in terms of dollars raised was Speaker Paul Ryan’s $19.8 million victory in 2016, according to the Center for Responsive Politics.

Some of the nation’s largest political organizations on the left have been pouring in resources to the race too, itching to capitalize off anti-Trump sentiment and hoping take back a seat in the Republican-held Congress. A decisive win in the district could send a message ahead of the 2018 midterm elections that Democrats have a shot in traditionally Republican districts. 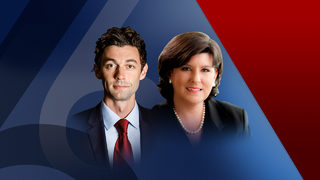 Ossoff won 48.1 percent of the vote during a primary in April, but failed to win the simple majority needed to take the seat outright. He now faces Republican Karen Handel, Georgia’s former secretary of state. By comparison, Handel has raised over $4.2 million, an impressive figure on its own. The amount of money going into the race is unprecedented, especially in a special election. In the year leading up to the 2016 election for the seat, Price raised $2,300,000 before easily defeating the Democratic candidate with 61.8 percent of the vote.

Before the special primary in April, Ossoff had already raised $8 million and Handel $467,000. Comparatively, ahead of the South Carolina fifth congressional district special election, which will also take place Tuesday, Democratic challenger Archie Parnell has raised $559,000.

Given the national attention, both Ossoff and Handel have raised money from around the country -- not just at home. While the most cash was raised locally in Georgia, donors from California and New York sent considerable cash in too. According to FEC data, Ossoff has raised $578,000 in Georgia, $536,356.61 from sources in California, and $423,000 from New York.

According to the Ossoff campaign, their average contribution is less than $50, with two thirds of donations coming in at amounts less than $200. Senator Bernie Sanders has not made a big push to help Ossoff fundraise, but instead is focusing on candidates with a more populist economic message, such as Virginia gubernatorial primary candidate Tom Perriello, who earned Sanders' endorsement before losing to Ralph Northam.

“This guy Ossoff is going to win because Democrats put gazillions of dollars into that race and they didn’t do that in the other two [earlier special election] races where the candidates widely outperformed Hillary Clinton... This is a testament to what happens when you put resources into a race versus not putting resources into a race,” a long time progressive strategist, who asked not to be named, told ABC News.

According to the strategist, his fellow progressives were frustrated that the party did not spend more money on other special election races earlier this year in Kansas and Montana, and do not think a potential Ossoff win should be treated as an indicator of the only type of Democratic candidate that can win.

Despite the cash and volunteer support coming in, the Democratic Congressional Campaign Committee (DCCC) insists Ossoff faces an uphill battle.

“Even with Ossoff’s considerable war chest and an unequaled grassroots army, Republicans hold numerous structural advantages, which is why the DCCC has invested heavily in expanding the electorate and persuading swing Georgians to vote their Ossoff,” the national political organization said in a statement in May.

The DCCC has contributed over $6 million -- including almost $5 million on Atlanta TV, radio, and digital advertising -- against Handel. A significant portion of this funding has gone specifically towards mobilizing black and young voters.

The Democratic National Committee has been actively promoting his candidacy and fundraising off of anti-Trump sentiment in minorities, women, and millennials in the district to raise more money as well. Earlier this month, the DNC announced that it will support the Democratic Party of Georgia’s efforts to target new voters who did not vote in the primary by paying for 10 additional field organizers. The DCCC contributed an eight person team to help train and lead the Ossoff campaign, and the organization’s deputy national field director has been embedded in Georgia since the primary in April.

Online efforts, like a fundraiser by the website Daily Kos through the Democratic nonprofit ActBlue, have raised nearly $2 million from over 100,000 individual donations for the Ossoff campaign. The ActBlue donation page for Ossoff states “flipping this seat from red to blue would send shockwaves through Congress — and replacing Trump's anti-Obamacare point man with a Democrat would be an amazing little cherry on top.”

Erin Hill, Executive Director of ActBlue, told ABC News that fundraising levels for Ossoff are in the top five of all the candidates and entities that have ever used ActBlue. Hill sees the success of Ossoff’s fundraising as a “harbinger of things to come” and notes that ActBlue is “seeing donations like never before.” The organization has surpassed $200 million raised in the first five months of 2017, the same amount raised in all of 2015.

“People really want to have their voices heard,” said Hill.

Swing Left, an organization focusing on assisting democratic candidates in swing districts supported by Hillary Clinton’s Onward Together nonprofit group, has also made major fundraising efforts, reminding voters that Ossoff fell short of an April victory by only 3,700 votes.

Tuesday it will be made clear if the additional millions of dollars contributed since the primary have paid off, or if the seat remains red despite nation-wide Democratic efforts.

On Election Day, count on WSBTV.com and Channel 2 Action News for coverage throughout the day. We’ll be with both candidates and have live, real-time results as they come in.

CLICK HERE for complete coverage of the 6th District runoff!

By  Siemny Kim and KIRO7.com

By  Tom Dees and Fox13Memphis.com