ATLANTA — Wednesday night, a bronze statue of Hank Aaron's legendary 715th home run will be unveiled at SunTrust Park, the new home of the Atlanta Braves.

"April 8, 1974, I just turned 10. I was living in my native town on the Danube River, in little Bulgaria. Europe. I had no idea that baseball even exists,” artist Ross Rossin said.

In his Buckhead studio, Rossin watched a replay of the famous homer.

"I smile when I see that.
Because I've seen that about 10,000 times, and I'm still excited about it," Rossin said.

It's that moment in history Rossin was commissioned to capture. He came up with a nine-foot bronze sculpture of Hammerin' Hank's record breaking home run.

"The position of the head. The eyes on the ball. You just feel it rather than see it. That's why you need to transform that feeling into the actual sculpture to make it real,” Rossin said.

SunTrust Park: The new home of the Braves 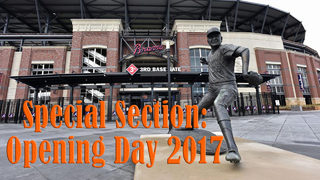 Aaron himself came to the studio to hold a bat. Another former Braves player posed in a replica of the uniform.

"I will never forget when I asked him, 'Mr. Aaron, what were you thinking in that moment in time? What was going on in your head?' Reasonable question, right? He said, 'I was just doing my job,'" Rossin said.

Besides being nine feet tall, the sculpture weights seven tons. Henry “Hank” Aaron is scheduled to attend the unveiling.

‘We have to do better:’ Atlanta rapper speaks out on social media about gun problem in the city

Hundreds of New Yorkers may be infected with polio virus, health officials say