COBB COUNTY, Ga. — When Richard Cole arrived in Atlanta, in the middle of World War II, he was front-page news.

He was called "Baby Boy," because his origin was a mystery.

According to the clerk at downtown Atlanta's Robert Fulton Hotel, "a slender, neatly dressed blonde woman," perhaps 18 years old, checked into the hotel on the morning of July 2, 1944.

A "chambermaid" entered the room several hours later and found an infant on the bed and no mother in sight. Accompanying the baby was a blue canvas bag with some formula and instructions on how he should be fed.

Richard Cole was a foundling. All of Atlanta knew his story. The newspaper wrote that city detectives were assigned to "seek and prosecute a mother so heartless that she could and did abandon her child."

Their efforts to trace a "Mrs. Richard Parker" to Salt Lake City proved fruitless. In the meantime, the baby was cared for first at Grady Hospital, then at a "boarding home," and then by a pair of foster parents named Frank and Eloise Cole.

The Coles, who were in their 40s, adopted the baby. They told the growing boy a story to help him understand why he was left on his own. "I was told my dad died in the war and my mother died in a traffic accident," said Richard Cole, 75 years later. "I don't think I ever believed that. But it didn't matter. That was who I was."

He thought about his biological parents occasionally, because every adopted child does that. He and his wife Nancy were traveling out of the country for the first time in the late 1990s when he had a problem getting a passport because of his "amended" birth certificate. The experience got him wondering: Where, exactly, did he come from?

He went to the state archives and found the news stories that heralded his birth.

Then came a few attempts at using Family Tree and 23andMe DNA services to trace his genetic roots. All turned up distant cousins but no constructive leads. And at the same time, he worried what he might find.

"You know something's out there," said Cole recently. "Sometimes you think, ‘Do I really want to know? Do I want to start opening that door?' Because you don't know what's on the other side."

Cole spoke about his search recently at the tranquil home he and Nancy share in the Hedgerose subdivision near Kennesaw.

Hummingbirds dart among the flowering shrubs outside their windows. The yard is bright with hibiscus and beauty berry. A quietly chattering waterfall is set among natural stone. Cole is tall and lanky, with a shock of graying hair and the gentle manner of someone who has spent many years caring for tiny feathered creatures.

During the 1980s, the Coles started bagging their own bird-friendly mix of birdseed and selling it to friends. Later, they opened a warehouse to package their birdseed, and began selling it in a succession of shops that they opened catering to birdwatchers. Eventually Richard left his career as an IT troubleshooter and Nancy left her job at a bank to operate Cole's Wild Bird Products full time and to run their five Bird Watcher Supply Co. stores.

Since selling their stores five years ago, they've found more time to travel, and lately the travel has brought Richard in touch with a family he didn't know existed.

The rise of consumer genetic testing has radically altered the world for thousands of adopted children seeking their biological families.

It has also occasionally wreaked havoc in families where secrets of parentage were uncovered after family members had their DNA tested.

(In this year's July-August issue of Harvard Magazine, Harvard chemistry professor Stuart L. Schreiber describes how his world turned upside down when he sent a sample to 23andMe and discovered that his father wasn't his father.)

Helping smooth the way for Cole was a "genetic genealogist" from Cobb County named Gerri Berger. Berger is adept at combining genealogical and DNA research, following the clues of chromosomes and public records to track down connections. She also knows how to diplomatically approach family members who might be nervous about family secrets.

A few years ago, Pamela Williams, a registered nurse living in the Quad Cities area of Iowa, sent a sample off to Ancestry.com, just to find out more about her ethnic heritage. Last year, she received an email saying she might have a relative in Georgia.

"You're thinking, OK, it's so easy to be scammed or whatever. I ignored it," said Pam, 71. The inquiry came from Gerri Berger, who persisted. Pam finally gave her a call. She told Pam about the genetic match with Richard, and urged her to give the Georgia man a call.

With access to Richard Cole's online accounts, Berger was able to find individuals who matched his genome. "She kept saying, ‘You have the same father!' When you hear things like this, you're a little bit blown away," said Pam. "She gave the history of him being abandoned. I'm thinking ‘What? This is unbelievable that this person has gone through this.'"

On the phone, their nervousness instantly melted away. "I just felt very at ease with him and very connected to him," said Pam.

Gerri Berger, an adoptee who grew up in New York and lives in Marietta, is a vocal advocate for adoptees, and campaigns for their right to learn about their birth parents.

Richard had long before made peace with his beginnings. If his mother dropped him off, at least it was in a nice hotel. "She didn't throw me out in a trash can." If he ever met his mother, he thought, he'd tell her "it worked out fine. Don't feel guilty."

But his timing was off. When he finally spoke to Pam on the phone, both his parents were gone. His mother had died only three years earlier, at the age of 89.

On the other hand, he'd found Pam, and within short order, he found three other half siblings on his father's side, most of them in and around Davenport, Iowa.

He had some catching up to do. He learned that his father was named Wayne Earl Brooks. Brooks went to Davenport High School, then joined the service. He had fathered Pam with Janice Anderson in 1946, then Nina, Cheryl and Michael with Ruth Durbin.

What neither Pam nor any of the other siblings knew was that Wayne had been married even earlier.

Mildred Benton was born Jan. 10, 1926. She was a 17-year-old high school senior when she found out she was pregnant. An announcement appeared in a local newspaper that she and Wayne Brooks were married in December of 1943, but there was no dress, no cake, no photos.

The union apparently was a quiet one because a few months later, she graduated from high school and traveled to Boston to marry Ralph Bartholomew. Bartholomew, who was serving in the military at the time, was from Moline, just across the river.

It was through Mildred and Ralph's child, Suzanne Bartholomew, that Berger confirmed Richard's connection to Mildred.

Mildred would return to Iowa, marry twice more, and develop a career as an artist and a patron of the arts.

For a while, Mildred signed her paintings "Ben Sunday," apparently convinced that if visitors to her gallery thought she was a male, she'd sell more paintings.

She also turned out to be movie star gorgeous.

Her last union was with an executive at a tractor manufacturing corporation. But she never told Suzanne about the baby she left in Atlanta, nor, apparently, did she tell anyone else.

Richard thinks his father might never have known Mildred was pregnant. In any case, if he did, he never mentioned Richard's existence to any of the other half siblings. 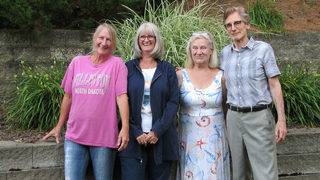 Following their telephone introduction, the half siblings made plans to get together. The first time was in March, when Pam and her husband Dave came to Atlanta to see two of Dave's  brothers, who live in the area. They combined that with a trip to the Coles' house. "We spent two days hanging out," said Richard.

Then Richard and Nancy traveled to Davenport, Iowa, this summer, arriving just before the Bix Beiderbecke festival, and they spent time with Suzanne, Pam, Nina and Cheryl.

The sisters were tickled by how much Richard resembles his paternal grandfather, Rollie Brooks, even down to the way he tilts his head. They also found some mannerisms that were shockingly reminiscent of the father.

Richard's eyebrows would go up as he contemplated, say, what restaurant to visit, said Cheryl, and "my sister and I would look at each other."

Or Richard would laugh — not a big laugh, more of a chuckle — and Pam and her husband Dave could hear echoes of Wayne's chuckle. "If Dave sees it and I see it, it must be real," she said. "I don't know how to describe it, but there is a definite feeling that this person is not a stranger."

Conclusion? Richard says the most valuable discovery he has made in this trip up the family tree is "that I have siblings, and they're alive, and they're great people and we all get along. That was fun, and they were having as much fun meeting me as I was meeting them."

DNA solved the mystery of Richard Cole's beginnings, but there are many mysteries yet to unravel. Chief among them is how did an 18-year-old Mildred Benton quietly slip out of Davenport, Iowa, make her way to Atlanta and leave a baby in a downtown hotel? Berger theorized that Mildred's new husband Ralph, who may or may not have been aware of Wayne, was transferred to a military base in Georgia, and Mildred went along.

What is clear is that a new family wrapped the abandoned Baby Boy in a network of care. And the grown-up Richard Cole has extended that network from Georgia to Iowa.

Speaking of Richard's adoptive family, Frank and Eloise Cole, Pam said "someone was watching over him. He was taken in by beautiful people who loved him and raised him to be a great person."

This article was written by Bo Emerson, The Atlanta Journal-Constitution