President Donald Trump visits Atlanta President Trump was in town to speak at the NRA convention and to show support for Karen Handel.

ATLANTA — President Donald Trump made history in Atlanta Friday as the first president in 34 years to attend the National Rifle Association convention.

The president spoke at the Georgia World Congress Center this afternoon. The event started at 12:30 p.m.

Traffic at a standstill as President Trump prepares to leave the Georgia World Congress Center.

I-20 and I-75/85 at a standstill right now as @potus convoy leaves @GWCC_ATL. Ga State Patrol assisting w/ traffic control.

President Trump finishes speech to NRA supporters, saying "I will never, ever let you down." Channel 2's Richard Elliot reports the president got a standing ovation.

President Trump just finished his speech to a standing ovation. He thanked the NRA for supporting his candidacy. #NRAAM2017 pic.twitter.com/nY7q9Di7y4

President Trump says Governor Nathan Deal is one of the pro-gun governors, which drew some cheers from the crowd.

Trump: "We'll build the wall. Don't even think about it... We need that wall and we're going to get that wall."

Trump: "The eight year assault on your Second Amendment freedoms has come to a crashing end.

Trump: "The eight year assault on your Second Amendment freedoms has come to a crashing end." pic.twitter.com/gjhssw4X9g

President Trump begins his speech by saying "it's truly wonderful to be back in Atlanta and he's "proud to be the first sitting president to address the NRA since the wonderful Ronald Reagan in 1983."

Trump arrives at the NRA convention to deliver a speech.

President Trump has landed in Air Force One in Atlanta's Hartsfield-Jackson International Airport.

Around 80,000 people are expected at the convention. Guests are being reminded they are not allowed to bring guns to the speech.

Channel 2's Richard Elliot spoke with a President Trump supporter who came to the convention to see what the president had to say about the second amendment.

"No threats on our Second Amendment, to make sure that he's a president that's actually going to support the second amendment," Lucrecia Hughes said. 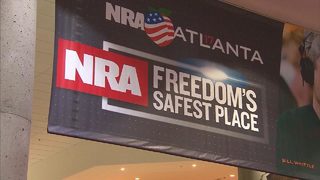 President Trump told attendees that he is on their side.

"You have a true friend and champion in the White House. No longer will federal agents be coming after law-abiding gun owners," he said.

Handel made it into a runoff against Democrat Jon Ossoff by defeating 10 other republicans, something Trump said he hopes doesn't happen again.

"And by the way, on primaries, let's not have 11 republicans running for the same position again. It's too nerve shattering," he said.

Protests against gun violence are planned for Woodruff Park.

President Ronald Reagan was the last president to attend an NRA convention in 1983.

Primer on Georgia's gun carry laws for the convention

Who can carry? Georgia residents who have been issued a weapons carry license or anyone who is visiting Georgia with a reciprocal permit.

I'm a Georgia resident but don't have a permit. How do I get one? In Georgia, county probate courts issue firearms licenses to state residents who are at least 21 years old, provided they consent to be fingerprinted and pass a criminal background check. Certain other exemptions or restrictions may apply. This is not, however, a quick process. If you have never had a weapons carry license before, the process may take more than a month.

If I want to go eat or get a drink outside the convention, can I carry a gun into a restaurant or bar? Yes. However, Georgia law allows a restaurant or bar owner to ask you to leave if they do not want you to carry in their establishment. The best way to avoid a problem is to ask before you are seated.

What if I want to go to church service on Sunday? License holders may carry their guns into a church or religious building, but only with permission from the church.

Can I carry at Hartsfield-Jackson Atlanta International Airport? Yes, in what are considered "non-secure" portions of the main terminals. You are not allowed to carry past the TSA security checkpoints or in the concourses.

Can I carry while attending the convention itself? Yes. Firearms will be permitted in the Georgia World Congress Center and the Omni Atlanta Hotel at CNN Center. However, be mindful that no guns are allowed in other areas of the CNN including the food court and retail shops.

What if I'm driving to the convention? Yes, you may carry in your car.

What if I'm planning to ride MARTA to the convention? Yes, you may take your gun on the train if you are legally licensed to carry it. But the agency requests that you also have your license with you while carrying your weapon. Anyone found carrying a firearm without a license will receive a citation and have the firearm confiscated.

Anything else I should know? State law currently bans guns from being carried on a public university or college campus. If you find yourself on one, you are legally allowed to store the gun in a locked compartment of your car in the parking lot. You may not carry on campus. State lawmakers earlier this year passed a bill that would allow guns on campus, but the bill is still pending before Gov. Nathan Deal.

Information from the Atlanta Journal-Constitution was used in this report.