Cheetah dancers allege sex assault, drugging set up by co-workers A group of former dancers who have now come forward with serious allegations against the strip club, point out the vast difference between sexuality and sexual assault.

ATLANTA — They made a healthy living selling sexuality at one of Atlanta's hottest strip clubs, The Cheetah.

But the group of former dancers who have now come forward with serious allegations against the strip club point out the vast difference between sexuality and sexual assault.

Many of the women danced there for years, and are now telling Channel 2 Action News and The Atlanta Journal-Constitution harrowing stories of being drugged and assaulted while on the job.

Several accuse their own co-workers of setting up those dangerous situations.

Valente says she saw everything from inappropriate touching to sexual intercourse inside the club's private VIP rooms.

She says floor managers were handsomely tipped by dancers who were willing to do almost anything for those preferred bookings.

"There were some girls just like myself who were entirely unwilling to go along with those things," said Valente, who outlines most of the allegations in a lawsuit she filed.

She and several others say high-rolling customers engaged in illegal sexual contact with dancers, and assaulted some of those who refused their unwanted advances.

Some of the women say they were even drugged, assaulted, or raped by customers who had higher expectations, after paying the floor managers up-front.

"Sexual abuse is terrible in any way, shape or form, but it does make it worse when the people that are supposed to be protecting you are perpetuating it," said another dancer who didn't want to be identified.

That woman said she was sexually assaulted on several occasions.

"They'd grab you, touch you, do all kinds of things, touch themselves. The money's not worth your safety," the woman added.

She says floormen were sometimes reluctant to protect those unwilling dancers when their customers got aggressive.

"Oh, it puts us in a very dangerous situation, especially when it happened in the closing door VIP's, because you're just there on your own," said the woman.

"It's inhuman," the woman said of the floormen, "We were just sexy little ATM's for them." 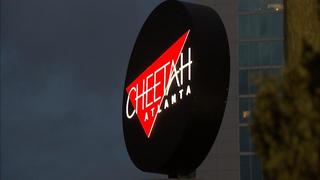 A former floorman, who also wanted to remain anonymous for fear of retaliation from the club, said his former colleagues knew the women needed the lucrative VIP room bookings to make a living.

He says he never sold more services than the club allowed, but he did profit from the tipouts the women gave to the group of floormen, and he regrets it.

"Coming into The Cheetah and slowly realizing that I wasn't security, I was just a liaison to nefarious activity, it made me upset," he said.

He recalls having to ask permission from supervisors in order to throw out violent customers; high rollers and VIP's were allowed to stay even after dancers felt threatened.

The women say some floormen would force a dancer who wouldn't participate in sexual activity to give back the customer's money, and then replace her with another dancer, who was "more fun."

"It's hurtful, it's wrong," said a third woman, "We are all at work to make money but not at the risk of someone else's physical or emotional well-being."

That woman says she was raped by a customer while working in a VIP room in March, 2013.

"I was turned around and he pulled me down," said the woman.

It is Channel 2 Action News policy not to identify victims of sexual assault.

The woman says she ran from the room, and reported the incident to a house mom, a female manager who oversees scheduling and operations of the dancers.

The woman says the house mom proceeded to get her hammered on tequila shots, instead of making a report to the club owner or police.

The club's attorneys acknowledge something "unwanted" happened, but claim the dancer had a prior relationship with that customer.

She says she doesn't even know his name. And she never reported the incident to police later, fearing it would be her word against the patron's. She didn't believe the club would back her up, since the floormen allowed the patron to remain at The Cheetah after the incident.

"That was more than what I emotionally could handle. I was better at just putting it behind me and personally moving on," the woman said.

The Cheetah's attorneys say the lawsuit is an effort to extort money, and that club policy strictly prohibits drug use, sex and any touching of dancers.

"Clearly, some dancers don't follow that, because they are trying to get money out of customers," acknowledged Ed Garland, part of The Cheetah's high-profile legal team.

But Garland pointed out that the floormen are required to immediately stop any sexual activity of which they are made aware, and remove the patron from the club.

"This environment is not one designed to promote any assault upon a woman," Garland said.

He added that in 30 years at The Cheetah's Midtown Atlanta location, there has never been a sex-assault claim made to club owners, management or police.

Valente says she repeatedly complained to her bosses, to no avail.

"I hope that this stops," Valente said. "I hope that by bringing this forth it shines light on some dark situations and that no more victims are created from this."

Many of the ex-employees admit they were fired from the club, but several claim it was because they were vocal against this culture they've described.

Since Channel 2 and the AJC began asking about these allegations, the club has changed its policy -- putting up signs warning dancers not to tip floormen for booking high rollers into VIP rooms. The club has also removed the doors from the VIP rooms.

The attorneys say those measures are not related to the Channel 2 - AJC investigation, and were already in the works.